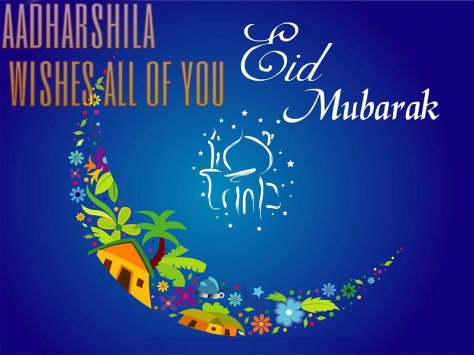 Eid al-Fitr( “festival of breaking of the fast”), also called Feast of Breaking the Fast, the Sugar Feast, Bayram (Bajram), the Sweet Festival or Hari Raya Puasa and the Lesser Eid, is an important religious holiday celebrated by Muslims worldwide that marks the end of Ramadan, the Islamic holy month of fasting (sawm). The religious Eid is a single day during which Muslims are not permitted to fast. The holiday celebrates the conclusion of the 29 or 30 days of dawn-to-sunset fasting during the entire month of Ramadan. The day of Eid, therefore, falls on the first day of the month of Shawwal. The date for the start of any lunar Hijri month varies based on the observation of new moon by local religious authorities, so the exact day of celebration varies by locality. However, in most countries, it is generally celebrated on the same day as Saudi Arabia.

Eid al-Fitr has a particular Salat (Islamic prayer) consisting of two Rakats (units) and generally offered in an open field or large hall. It may be performed only in congregation (Jama’at) and, has an additional extra six Takbirs (raising of the hands to the ears while saying “Allāhu Akbar”, literally “God is greatest”), three of them in the beginning of the first raka’ah and three of them just before Ruku’ in the second raka’ah in the Hanafi school of Sunni Islam.Other Sunni schools usually have twelve Takbirs, seven in the first, and five at the beginning of the second raka’ah. This Eid al-Fitr salat is, depending on which juristic opinion is followed, Fard (obligatory), Mustahabb (strongly recommended, just short of obligatory) or mandoob(preferable).

Muslims believe that they are commanded by Allah, as mentioned in the Quran, to continue their fast until the last day of Ramadan and pay the Zakat and fitra before offering the Eid prayers.
History
There is mention that Eid al-Fitr was originated by the Islamic prophet Muhammad. It is observed on the first of the month of Shawwal at the end of the month of Ramadan, during which Muslims undergo a period of fasting.

According to certain traditions, these festivals were initiated in Madinah after the migration of Muhammad from Mecca. Anas reports:

When the Prophet arrived in Madinah, he found people celebrating two specific days in which they used to entertain themselves with recreation and merriment. He asked them about the nature of these festivities at which they replied that these days were occasions of fun and recreation. At this, the Prophet remarked that the Almighty has fixed two days [of festivity instead of these for you which are better than these: Eid al-Fitr and Eid al-Adha
For Muslims, both the festivals of Eid al-Fitr and Eid al-Adha are occasions for showing gratitude to God and remembering Him, and are an occasion of entertainment. ‘Aishah narrates that when on an Eid day her father Abu Bakr stopped young girls from singing, Muhammad said: Abu Bakr! [Let them sing]; every nation has an ‘id and is our Eid.
Celebrate this beautiful featival with joy and harmony.

Serving Humanity For Humanity Since 2001